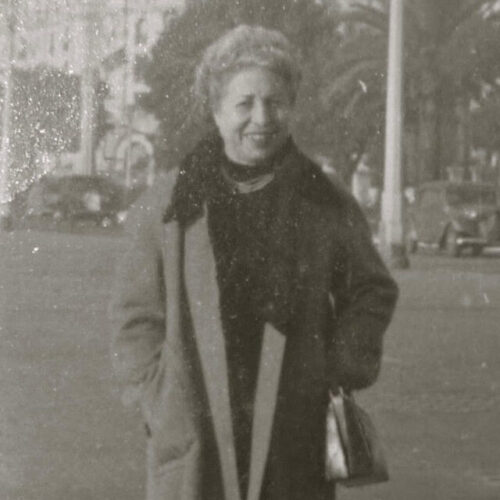 “My paternal grandmother, Sonia Fidler (whom I called “Babouchka”) was born in 1888 in Balti(city of the Russian Empire, now Moldavian).
In the 1920s, she came to settle in France, in Nice, after passing through Warsaw.

Widowed in 1937, at the age of 51, she worked hard to feed her two children. She was holding a ladies’ ready-to-wear store in Nice, on the Promenade des Anglais, where this pretty photo of her was taken in the 1950s.

Curiously, I never saw her cook: she had help for that, because she was away all day, but one day, long after she disappeared, I discovered a recipe for pickled herring in white vinegar , a little sweet, and my mother (her daughter-in-law, therefore) said to me: “Ah, but those are Sonia’s herrings! – and I appreciate them even more since!

It’s an easy recipe, which I called “My grandmother’s herrings”, of course. As I adore them, I make them often, and every time I serve them, everyone thinks of her, even my children who have never known her.

This delicious recipe that I got from my Babouchka now appears in a book that I co-wrote with Daniel Rozensztroch, entitled: HERRING, A LOVE STORY (ed. Pointed Leaf Press, NY).”